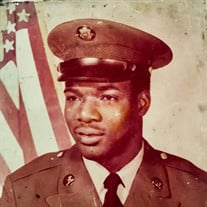 Mr. Willie Lee Wright, 68, passed away October 3, 2021 at the University Of Oklahoma City, Oklahoma. Willie Lee was born in Holmes County on May 17, 1953 to Lillie Wright and the late James Cobbins and was also raise by the late Willie Ed... View Obituary & Service Information

The family of Willie Lee Wright created this Life Tributes page to make it easy to share your memories.

Send flowers to the Wright family.