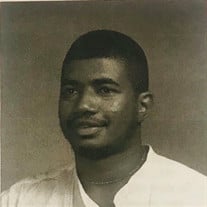 William Demetrius Johnson, affectionately known as “D.D.” was born on July 4, 1975 in Starkville, MS at Oktibbeha County Hospital to Willie Harvey Johnson and Selma Hudson-Davis. D.D. was the oldest of two children born to Willie and Selma. D.D. transitioned to his Heavenly home October 10, 2021 in Ruleville, MS. William (D.D.) grew up in the city of Starkville, Mississippi. He had a great love for God, his family , and friends. He accepted Christ at the early age of 11, under Reverend Leroy Harrison, He grew up in the Community of Starkville, MS. He attended the Josey Creek Missionary Baptist in Starkville, MS where he was a faithful member until he moved to Ruleville, MS. William enjoyed his school years under the Starkville Public School District (Elementary School, Middle School, and High School). He also enjoyed the company of many people… He was a people person. I would often tell him he was like both of his grandmothers, Marguerite Hudson, and Marie Johnson, and his great grandmother, Dollie Rush. He never met a stranger that he didn’t like. At the Ruleville Nursing and Rehabilitation Center where he resided until his death, he was well liked by those that knew him. He had a great love for his family, and friends. He was always a positive, and genuine person who always thought of others first. He loved making others smile by doing and saying silly things. William Demetrius Johnson leaves to cherish his memories: his parents: Rev. Willie Harvey (Minister Letha) Johnson, of Starkville, MS & Selma Hudson-Davis (Hugh Anthony) of Jackson, MS; Sisters: LaShondra (Tomaz) Adams, of Flowood Ms & Keva Bryant (Darrell), of Atlanta, Ga; Niece: Zaria Marie-Lynn (Keldrick), and Nephew: Alex Bryant; Brother, Ibrahim El-Amin, Sisters: Khadija El-Amin, Aisha El-Amin Yeates, Nephews: Zavien Williams, Brain Yeates, Corbin Yeates; Nieces: Duthess Yeates and Zariyah Williams; and a host of very close Uncles, Aunts, and Cousins.

The family of William Demetrius Johnson created this Life Tributes page to make it easy to share your memories.

Send flowers to the Johnson family.