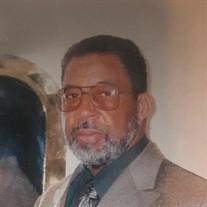 Wesley H. Jones was born in Starkville, MS on March 29, 1947 to the union of the late Earnest and Sarah (Jefferies) Jones. As a young man, he accepted Christ as his Savior and joined Second Baptist Church where he remained a member until his death. He was called Home early in the morning of Sunday, September 13, 2020 at his residence in Starkville, MS. He was a graduate of Henderson High School, Class of 1966. Wesley also worked with his father in the family's business while attending high school. He attended Mississippi Valley State University before volunteering to serve four years in the United States Air Forces during the Vietnam War. After his military tour was completed, he returned to help his family operate and manage the family business. In 1987, Wesley became the sole proprietor of Jones Shoe Shop which provided repair service to Starkville, Mississippi State and the surrounding areas. The shop closed on April 30, 2014 after 74 years of service. Wesley took pride in being a member of the local Chamber of Commerce for several years, being on the Board of Directors for Rest Haven Cemetery, and a member of OCTS/HHS Scholarship Fund, INC where he wore many hats within the organization. Wesley served on the usher board at Second Baptist Church and was a member of the Brotherhood Breakfast Committee. Wesley united in holy matrimony to Catherine Kelly Jones on September 24, 1972 and they shared 47 years of happiness. In retirement, he enjoyed working in the yard and spending time with his grandchildren. His favorite pastime was collecting coins and traveling. Wesley was preceded in death by his parents and brothers, Otis Sidney Jones, Melvin Carter Jones Sr. and Eddie Charles Jones. Wesley is survived by his wife, Catherine Kelly Jones; his children: Wesley H. Jones (Brittany) and Candy M. Jones; his siblings: Barbara Curry (Isaac), Cecil A. Jones (Lois), and Jerry B. Jones; his grandchildren: Westin, Wesley III, Kamdyn, and Kyra and a host of nieces, nephews, relatives and friends.

Wesley H. Jones was born in Starkville, MS on March 29, 1947 to the union of the late Earnest and Sarah (Jefferies) Jones. As a young man, he accepted Christ as his Savior and joined Second Baptist Church where he remained a member until his... View Obituary & Service Information

The family of Wesley Henry Jones Sr created this Life Tributes page to make it easy to share your memories.

Send flowers to the Jones family.