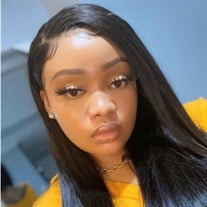 On May 20, 1997, Shamaesha Atalaya Quinn was born. She was one of twelve children. She accepted Christ at an early age and join Upper Prairie Creek M.B. Church in Woodland, MS. She later joined Word of Truth Ministry Church in West Point, MS, where she remained a faithful member until her death. Throughout her life time, Shamy, as she was affectionately known as, achieved many accolades. During her elementary and high school years, she always obtained highest average; she was Valedictorian of the Class of 2015 at West Point High School. After graduation, Shamy joined the United States National Guard where she received many promotions. After completing her basic training with the United States National Guard, she attended Mississippi State University where she received her Bachelor of Science degree. Her aspiration was to become a medical doctor so she could help as many people as she could. Shamy was very family oriented. She loved spending time with family and friends and traveling. She never met a stranger and greeted everyone with a smile. Shamy was preceded in death by her grandparents: Raymond and Sylvia Quinn, her great-great grandmother: Mary Ann Garner, and her great-grandparents: Willie Rufus and Daisy Cousins who helped to raised her throughout her childhood. Shamy leaves to cherish her memories, her loving mother: April Roberson of Starkville, MS and her loving father and supportive stepmother: Derrick and Francine Quinn of Pontotoc, MS; her grandmother: Vanessa Stovall of Starkville, MS; her grandfather: Dennis(Sharon) Roberson of West Point, MS; her great-grandmother: Elosie Stovall of West Point, MS; her siblings: Detavious Quinn, Jamuzulun Roberson, Triquivion Roberson, Ta’Mya Roberson, Destiny Roberson, Kimaren Roberson, Layla Roberson and Alanna Roberson, all of Starkville, MS, Darrion Quinn of Pontotoc, MS, and Alajah and Jaylen Jones both of Tupelo, MS; a special great aunt: Angelia Cousins Burns (Robert) of Mantee, MS; very special friends: Ajacia Chandler and Shacquinta Seals along with a host of aunts, uncles, cousins and friend.

On May 20, 1997, Shamaesha Atalaya Quinn was born. She was one of twelve children. She accepted Christ at an early age and join Upper Prairie Creek M.B. Church in Woodland, MS. She later joined Word of Truth Ministry Church in West Point, MS,... View Obituary & Service Information

The family of Shamaesha Atalaya Quinn created this Life Tributes page to make it easy to share your memories.

Send flowers to the Quinn family.