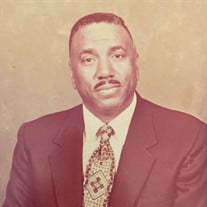 Mr. Roosevelt Taylor was born on September 18, 1924 in the New Light Community of Starkville, Oktibbeha County, Mississippi. Mr. Taylor was the fourth of six children born to the late John and Gertrude Taylor. He started his life journey by entering the Army at the tender age of seventeen. Soon, he found himself in France and Northern Africa working as a transporter with the 27th Quartermaster Company of the U.S Army during World War II. After his tour of duty, he returned to Starkville and traveled north to Gary, Indiana to work at the Steel Mill. After working one year in the steel industry, Mr. Taylor returned home to Starkville and found employment at Mississippi State University cafeteria. In 1948, once Mr. Taylor realized that Starkville did not have a transit system that serviced Black people, he started his taxi service called "Ever-Ready Cab Company." He transported countless people of color, including the Grammy Award Winner, Ray Charles, around the Starkville area. In addition to his taxi service, Mr. Taylor also owned a shoe shine business named "Pat's Shoe Parlor" which also housed Rogers Beauty Shop. Mr. Taylor made great contributions to the community of Starkville. He has been recognized as a Trustee of Griffin Chapel United Methodist Church, a World War II Veteran, entrepreneur and philanthropist. The Main Street Community Association initiated the process to rename the street where he lived in his honor. Mr. Taylor enjoyed 72 years of married with Magnolia Boyd after they were joined in holy matrimony on August 9, 1944. Mr. Taylor has ten children. He took great pride in providing for his family. He ensured they all received a formal education. Following his Christian upbringing, he accepted Christ at an early age. He was groomed in the church and practiced holy beliefs throughout his life. A life member of Griffin Chapel United Methodist Church, Mr. Taylor departed this life on August 22, 2021. He was preceded in death by his wife, Magnolia B. Taylor; son, Roosevelt Taylor Jr.; parents, and all of his siblings. Those who will be profoundly deprived of his presence are his children: Dorothy Vaughn, Julia Phine Wilson, Alma Jean Taylor, Lawrence Taylor, Diane Taylor-Singleton, Deborah (Michael) Shannon, Ronnie (Gina) Taylor, Vanessa Larry and Andre Taylor; grandchildren: Bruce (Twanda) Wilson, Clifton Vaughn, Darin Vaughn, Jennifer Taylor-Johnson, Victoria Taylor, Ronnell (Deena) Taylor, Ryann Taylor, Micaela Taylor, Michael, Rashonda (Ben), and Corey Shannon; 12 Great-grandchildren; 8 great-great grandchildren; and a host of nieces, nephews, relatives and friends.

Mr. Roosevelt Taylor was born on September 18, 1924 in the New Light Community of Starkville, Oktibbeha County, Mississippi. Mr. Taylor was the fourth of six children born to the late John and Gertrude Taylor. He started his life journey by... View Obituary & Service Information

The family of Mr. Roosevelt Taylor Sr. created this Life Tributes page to make it easy to share your memories.

Send flowers to the Taylor family.