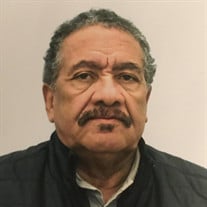 Norman Clark, Jr., 77, passed away peacefully on July 14, 2021. Services will be held at United Baptist Church in Cleveland, MS on Saturday, July 24 at 1:00pm. Visitation will be held prior to the service at 11:00am. Rev. Terrence Rash will officiate the service and Hairston and Hairston Funeral Home is entrusted with arrangements. A private burial will be held on Sunday at the Townsend and Clark Family Cemetery. Norman was born in Yazoo County, MS to Norman Clark, Sr. and Rosebud Clark on August 29, 1943, and was the first of their eleven children. He enjoyed being the oldest, and truly “took it to heart.” The family soon moved to Holmes County where Norman grew up and where he accepted Christ. After graduating high school from Tchula Attendance Center, he attended Tougaloo College, receiving both a B.S. degree and a future wife. To that union two children were born, April and Justin. Although Norman mastered many professions—from farmer to chemist--he will best be remembered for his most recent occupation as the Owner/Operator of Appliance Warehouse in Cleveland, where he had the good fortune to meet and serve so many residents of his local community. Norman is preceded in death by his daughter, April Clark Grims; his parents, Norman and Rosebud Clark; two brothers, James Lavell Clark and Lonnie Clark; and two sisters, Louise Shannon and Mary Rogers. Norman is survived by his wife of 48 years, Georgene; son, Justin; grandson, Reyhan Grims; brothers, Ottis (Mattie) Clark; Edmond Clark; Richard (Brenda) Clark; Leon (Elizabeth) Clark; Louis Clark and Antoine Washington; sisters, Inez Rushing; Marvis Martin; and Kayrecia (Winfred) McNeil; and a host of nieces, nephews, and friends. Norman’s outgoing personality has earned him lifelong friendships—from childhood, schoolmates, Kappa Alpha Psi Fraternity brothers, to everyday life. He was always “larger than life,” and sometimes louder, too. Laughing, joking, opinionated to a fault, yet loving and nurturing, his spirit will continue to live on in the hearts of all who knew him. Enforced COVID protocol will include temperature check, mask requirement, social distancing, and contact tracing. Preferred attendees: fully vaccinated.

Norman Clark, Jr., 77, passed away peacefully on July 14, 2021. Services will be held at United Baptist Church in Cleveland, MS on Saturday, July 24 at 1:00pm. Visitation will be held prior to the service at 11:00am. Rev. Terrence Rash will... View Obituary & Service Information

The family of Mr. Norman Clark Jr. created this Life Tributes page to make it easy to share your memories.

Send flowers to the Clark family.