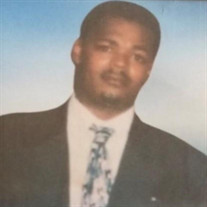 Marvin Mitchell was born on May 21, 1969 in Durant, Mississippi to the late Jennett Mitchell and Hubert Guyton. On Monday, May 24, 2021, Marvin departed this life on earth at the Merit Health River Regional Hospital in Vicksburg, Mississippi.... View Obituary & Service Information

The family of Marvin Mitchell created this Life Tributes page to make it easy to share your memories.

Send flowers to the Mitchell family.