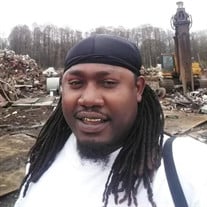 Laderrick Jermaine Conner was born September 27, 1985 in Macon Mississippi to Shirley J. Dent and L. C. Rice. He was formerly employed with the Columbus Scrap Yard. Laderrick passed away on July 19, 2021. He was preceded in death by his mother,... View Obituary & Service Information

The family of Laderrick Jermaine Conner created this Life Tributes page to make it easy to share your memories.

Send flowers to the Conner family.