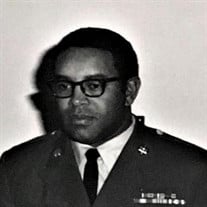 Joshua Craddieth, named after his paternal grandfather, was born June 17, 1945 to James and Bernice Dickerson Craddieth in Lowndes County, MS. He accepted Christ at an early age and became a member of Hebron C.M.E. Church. Educated in Steens,... View Obituary & Service Information

The family of Sgt Joshua Craddieth created this Life Tributes page to make it easy to share your memories.

Joshua Craddieth, named after his paternal grandfather, was
born...

Send flowers to the Craddieth family.