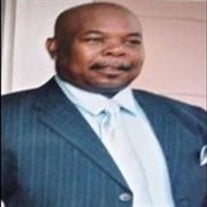 The family of Mr. Jessie Spencer wishes to acknowledge their deep appreciation for your support.

Send flowers to the Spencer family.