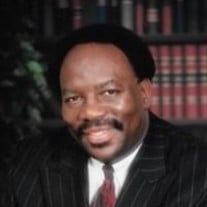 Dr. James Clarence Brown, Jr January 2, 1949 – April 28, 2021 Dr. Brown, is lovingly known as Jim, Choc, Bro, Jr, Dr. B., Doc Brown, Unc, and Big Brown by his family, friends, and classmates. He is the son of the late Mrs. Jurry Mae Drake Brown Bardwell and James Clarence Brown Sr, and Mr. Earl Bardwell. Dr. Brown grew up in Second Baptist Church, Starkville, MS and joined Union Grove Baptist Church, Calhoun City, MS after his marriage to Maxine. He attended Henderson Elementary and Henderson High School, graduating in 1967, where he excelled both academically and athletically. He attended Mississippi Valley State University on an athletic scholarship, then went to Canada and briefly played Professional Canadian Football for the Saskatchewan Rough Riders. Thereafter, he returned to the states to serve in the U.S. Military Branch of the Army, during the Vietnam War Era. His military journey took him through Fort Rucker, Alabama, Fort Leonard Wood, Missouri and West Point, New York. After proudly serving two years, three months, and twenty-six days, he returned to his home in Starkville, MS to continue his education. He attended Mississippi State University, completing requirements for both his Bachelor’s and Master’s degrees. Dr. Brown coached football and taught classes at Coahoma Junior College in Coahoma, MS, and coached girl’s basketball and taught PE at Rust College in Holly Springs, MS. Doc left college coaching to experience other avenues of employment. He worked as a Recreation Specialist for the VAs in Chillicothe, Ohio, Phoenix, AZ, Lawton, Ok, and Aberdeen Proving Ground, Aberdeen, MD. Dr. Brown then pursued his ultimate goal of acquiring a doctorate degree in Educational Leadership and becoming Chancellor/President of an institution of higher learning. He completed his doctorate degree while working in the Learning Center and graduate school at The University of Mississippi. Shortly thereafter, he was hired by Auburn University where he served 8 years as a member of the President’s Cabinet as Assistant to the President for Minority Advancement. The tutelage he received at Auburn prepared him for the final phase of his career endeavor. He was hired as Chancellor of Southern University’s branch campus in Shreveport/Bossier City, LA, where he served for several years. Thereafter, he continued in supervision and instruction and was making preparations to retire when he was stricken ill. Six of those six and a half years of his illness he was a resident of the MSVH, Oxford, MS. Doc once proclaimed, “I’ll never retire!” Simply put, he was preparing to transition from the classroom into the boardroom of his own non-profit organization. James C. Brown, Jr. wanted to live and enjoy life to the fullest, to help those in need, to teach, mentor, counsel, and to encourage others to pursue their dreams. His gift enabled him to participate and present in any conference, convention, and seminar of interest to him, then bring that information back and share it with others. His thirstful quest took him from Starkville, MS to the four borders of these United States, to Canada, Mexico and down to the Caribbean Island of St. Thomas. Dr. James C. Brown, Jr, passed away on April 28, 2021, at Baptist Hospital/Hospice in Oxford, MS of complications from an extended illness. He was a resident of the Mississippi Veterans Home in Oxford, MS for six years. He is survived by his wife, Maxine Mhoon Brown of Derma, MS; one child, Demetrios (Deberal) Brown; two sisters, Louise (Oscar) Gordon, Sr of Kentucky, and Peggy Bardwell Thomas of Indiana. Four grandchildren, Trinity, Isaiah, Zaccary, and Olivia. Nieces, Sonya (Greg) Johnson and Shauntel Scott. Nephews, Oscar II (Tonya), Sean and Omari Gordon, Nicholas and Tyler Williams. Walk through visitations will be: 1. Union Grove MB Church, Calhoun City, MS, from 5 to 7 pm on Wednesday, May 5, 2021 2. Hairston & Hairston Funeral Home, Starkville, MS, from 1 to 5:30 pm on Thursday, May 6, 2021 3. Graveside Services, for family only, Josey Creek Cemetery, Starkville, MS at 11AM on Friday, May 7, 2021. (Masks are required for all events.)

The family of Dr. James Clarence Brown Jr. created this Life Tributes page to make it easy to share your memories.

Send flowers to the Brown family.