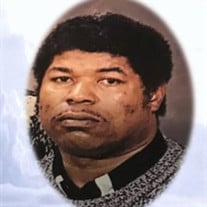 Reflection of Life A Time To Be Born: Born August 24, 1949 to the late Wilson and Ruby Ashford in Starkville, MS. He was preceded in death by his sister, Marsha Mims Ashford. A Time To Grow: Henry attended school within the Starkville school... View Obituary & Service Information

The family of Mr. Henry C. Ashford created this Life Tributes page to make it easy to share your memories.

Send flowers to the Ashford family.