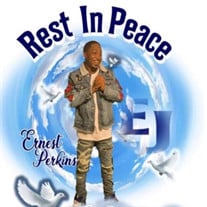 Ernest Dewayne Perkins Jr. was born to Ernest and Luella Perkins on April 22, 1988 in Starkville, MS. Ernest departed this life to be with the Lord on March 4, 2021. Ernest accepted Christ at an early age and became a member of Sand Creek Chapel... View Obituary & Service Information

The family of Ernest D. Perkins Jr. created this Life Tributes page to make it easy to share your memories.

Send flowers to the Perkins family.