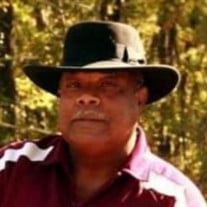 Calvin Jones was born on November 5, 1955 to the late Annie Mae and John Arthur Jones in Starkville, Mississippi. He accepted Christ at an early age at Mt. Airy M.B. Church in Sturgis MS, but then later became a member of Mt. Salem M.B. Church in Ackerman, MS. Calvin began his educational journey in the Starkville Public School system and graduated from Sturgis High School in 1976. On February 19, 1977, he married Shirley Fair and they were blessed with 44 years of marriage. To their union, two children were born, Towanda and Monica. In January of 1976, Calvin enlisted in the Army National Guard 155th Brigade of Eupora, MS where he obtained the rank of Sergeant First Class (E7), and was Honorably discharged in 1996. He was also Veteran of the Desert Storm War. He worked at Gulf States Manufacturer in Starkville MS for many years. He was also a Choctaw County Auxiliary Police Officer. Throughout his life he held many titles. He was very dedicated to Broken Wings Ministry Food Pantry and General Store. At Broken Wings, he was the client interviewer for the Food Ministry, served on the Broken Wings Board from 1999-2021 and was the recipient of the Broken Wings for Service in the Food Ministry award in Oct 2016. Calvin also shared his faith through his service with the 4:15 Ministry. He was a Lodge Member 281A, Member of American Legion District IV, Boy Scouts Scoutmaster Troop 141, Security Officer, Poll Worker for Choctaw County, Member of the 4:15 Ministry and a Sunday School Superintendent. He was also a member of the Prairie Opportunity Board and he received the 2016 Keeper of the Dream Award for Community Service. He had his own lawn service business until his health begin to fail. Calvin lived a life that is now speaking for him. After his retirement, he loved helping anyone in his community. He loved making people laugh and telling them stories about being a Soldier. He never missed an opportunity to give his advice to the young and old. He was a die-hard MSU and New Orleans Saints fan. He loved fishing and collecting antique jewelry. He also loved his brim hats and snuff. On April 25, 2021, God called his Soldier home to be in the Army of the Lord. He was preceded in death by his parents, four brothers Willie B., Bobby Joe, John L, & Richard Jones; one sister Mary Ann Jones; one aunt Eva Cork; his mother-in-law Mamie Shells and father-in-law Clayton Fair; brother-in-law Robert Fair. He leaves to cherish his memory: his wife Shirley; two daughters Towanda Jones and Monica (Melvin) Arterberry both of Ackerman, MS; four grandchildren Javarius Norman, Jalon James, Jalia James, and Treyvion Arterberry all of Ackerman, MS, bonus granddaughter Janasia Smith of Louisville MS; two sisters: Nita (Victor) Terry, Linda Lee both of Starkville, MS; one brother: Eugene Jones, Jackson, MS; two Aunts Ruth Jones (Illinois) and Georgia Jones Perkins (Memphis, TN); two Uncles, John and James Hudson both from Michigan; 4 Sister-in-laws, Clara Fair, Mattie McDaniels, Sarah Shells and Valerie (Earl) Jackson all of Ackerman, MS; one brother-in-law, Lawrence Shells (California). He also had a very special bond with his bonus brother Larry Hughes (Beverly) & their children. They have remained friends throughout their entire life until his death. He also had some moments with the Lampkin family and was the caretaker of Gladys Weatherly. A host of nieces, nephews, cousins, other relatives, and friends that were very special to him.

Calvin Jones was born on November 5, 1955 to the late Annie Mae and John Arthur Jones in Starkville, Mississippi. He accepted Christ at an early age at Mt. Airy M.B. Church in Sturgis MS, but then later became a member of Mt. Salem M.B. Church... View Obituary & Service Information

The family of Mr Calvin Jones created this Life Tributes page to make it easy to share your memories.

Send flowers to the Jones family.