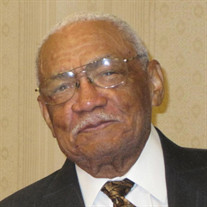 Billie Noel Coats was born December 25, 1929 in the Needmore Community of Starkville, MS. He was the youngest of eight children born to Young Coats, Sr. and Lucy Harris Coats. He peacefully departed this life on March 20, 2021 at 4:05 a.m. at Oktibbeha County Regional Medical Center. He attended Oktibbeha County Training School where he played high school football and graduated in 1949. He was also a lifelong member of Second Baptist Church. In 1949, he married Hazel Sudduth Coats, and to this union, four children were born, Alvin Noel, Alta Kate, Brenda Dwylette, and Billie Anthony. As a young man, he worked at Standard Oil Central Service Station. While working there, in 1959, he helped the firefighting effort at Old Main Dormitory on the campus of Mississippi State University, by working through the night to supply fuel for the fire trucks. In the mid-1960s, he was a football official for the Little Six Football Conference and was a founding member of the Oktibbeha County Training School-Henderson High School (Sam Skinner) Scholarship Fund. He retired as Supervisor from Weavexx (Lockport Felt) with over 30 years of service. When not working, and in retirement, he enjoyed traveling to area lakes to fish with friends, listening to music, playing cards, woodworking, and tinkering with and repairing broken items. He continued to be an avid sports fan and was an enthusiastic fan of the Starkville High School Yellow Jackets and the Mississippi State Bulldogs. Mostly, he loved spending time with his grandchildren and great-grandchildren. He was preceded in death by his parents, his wife of 67 years, Hazel, his son Noel, his daughter Brenda, and his siblings, Alta, Kate, Charles, Gladys, Young Jr, Mary Alice, and Henry. He leaves to cherish his memory his daughter, Alta Kate Ware (Charles); his son, Billie Anthony Coats (Linda), all of Starkville, MS; seven grandchildren and ten great-grandchildren. He also leaves a host of nieces, nephews, other family members and friends. Acknowledgements: Thank you to all who have offered expressions of condolences to our family through prayer, cards, visits, calls, food, and flowers. Your expressions of love and concern has helped sustain us through this difficult time. We pray God’s blessings on you and your family.

Billie Noel Coats was born December 25, 1929 in the Needmore Community of Starkville, MS. He was the youngest of eight children born to Young Coats, Sr. and Lucy Harris Coats. He peacefully departed this life on March 20, 2021 at 4:05 a.m.... View Obituary & Service Information

The family of Billie Noel Coats created this Life Tributes page to make it easy to share your memories.

Send flowers to the Coats family.