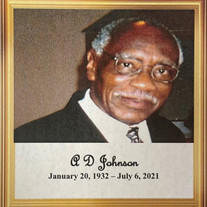 “Let not your heart be troubled: ye believe in God, believe also in me.” – John 14:1 A D Johnson, 89, of Starkville, MS was called from labor to reward at OCH Regional Medical Center on July 6, 2021. He was born in Noxubee County to Pledge Johnson and Fannie Gilmore Miller (Deceased). A D confessed Christ at an early age at Pine Grove M.B. Church but later moved his membership to Antioch M.B. Church before uniting with Sixteenth Section M.B. Church. He was educated in the Noxubee and Holly Springs school systems. He was employed by MSU and worked for forty-five years before retiring in 1995. A D was known, loved, and respected for his wisdom, character, and for having the heart of a servant which was demonstrated by his love for God, his family, the church, and the community. Some areas of service were church clerk, treasurer, Mt. Olivet District Congress registrar, and pioneer, manager, and secretary of Clayton Village Water Association. He also was one of the organizers of the Oktibbeha County Branch of the NAACP and served as its first president. A D has impacted the lives of many by the life he lived and the service he gave. Although he will be missed by many, his legacy will live on in the lives of those whom he has touched across the years. He is predeceased by his former wife, Rachael F. Johnson; a stepdaughter, Helen J. Harris; six siblings, Willie James Gilmore, Marshall Rogers, Eddie Gilmore, Thomas Od’neal, Claudia “Sut” Miller, and Cleo Hogan. He leaves to cherish precious memories: his loving and devoted wife, Claretha H. Johnson; a stepson, Rogeric J. Hogan; two sisters, Alberta Roberson and Gwen Johnson-King (Dwight) of Crawford, MS; one brother, Sylvester Short of Crawford, MS; four grandchildren, Debra Moore, Anthony McClain of Mexia, Texas, Delvin McClain (Willette), and Rogeric D. Hogan; seven great-grandchildren; ten great-great- grandchildren; a host of nieces, nephews, and other relatives and friends.

The family of A. D. Johnson created this Life Tributes page to make it easy to share your memories.

“Let not your heart be troubled: ye believe in God, believe also...

Send flowers to the Johnson family.